To find out how to judge the accuracy of Assessment tools...please click here..

To find out about how Axiology, can provide you with the most accurate Talent Benchmarking yet...please click here..

AxiometricsTM can be used not only to predict the subject’s future performance but also to provide insight into their core competencies, talents and developmental needs

Why Use Axiological Profiling?

Why Choose Axiometrics™ Over Other Types of Profiling?

What are you measuring? 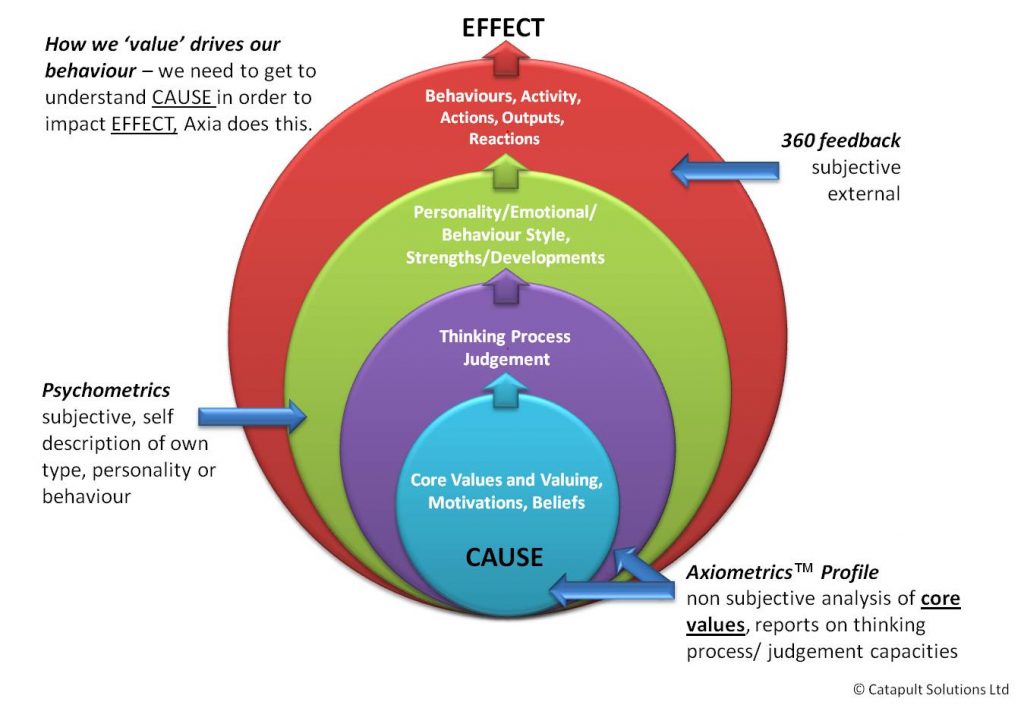 Why is Axiometrics™ Different?

The basic difference is that other profiling tools ask people to describe themselves, this introduces two main problems:

Axiometrics™ avoids both.  The assessment statements are not about the person taking it – the person simply does a mental task which is tracked.  The difference between agreeing or disagreeing with a statement or adjective about oneself (which are open to individual interpretation) and “a new car”, “a holy person”, “a uniform” (statements from the Hartman Value Profile) is clear.

Characteristics of Self-reporting tools and 360 feed-back:

In the highly competitive world markets, managers must make every effort to reduce the time involved in locating a good employee and reduce the loss to the company when an employee quits or is terminated, with any money invested in training also lost.  Therefore the use of screening instruments, psychological testing, personality assessments etc has become very popular in an attempt to help the manager make better hiring decisions.

In an effort to protect the rights of the citizens, the EEOC has established three requirements for any testing instrument used as part of the hiring decision process:

The third requirement is the responsibility of the hiring organization to monitor.  The other two are conditions of the instrument itself.

EEOC REQUIREMENT #1 – the instrument must measure what it says it measures.

The industry standard used for validating instruments for effectiveness and accuracy is the Minnesota Multi-Phasic Personality Inventory (MMPI).  A 100% statistical concurrency between the MMPI and Hartman Value Profile, entitled “Concurrent Validity Study of Hartman’s Valumetrics and Value Science Assumptions as a Revolutionary New Basis for Modern Behavior Science Applications” was published in the VA practitioner by Dr. Leon Pomeroy and Dr. John Davis.

Another study performed by Dr. John Austin and Barbara Garwood, entitled “the Relationship of the Hartman Value Profile, Rokeach Value survey, Allpot-Vernon-Lindzey Study of Values and Kohlberg’s Theory of Moral Development” was presented to the National Association of School Psychologists in March, 1977. This study of the most prominent value measurement instruments validates the Hartman Value Profile in the measurement of value structures.

EEOC REQUIREMENT #2 – the instrument cannot discriminate according to age, race, or sex.

Full data is available on sample group and profiles for each element.  In sum all statistics produced a significant difference of zero in the groups examined. In short: